The day after my eldest step daughter’s birthday, 23rd March 2020, we went into Lockdown. We had the most beautiful weather, clear blue skies and everything began to feel very surreal. Were we suddenly in a sci-fi film? What was happening to the world as we knew it? Traffic ceased, the roads cleared, the skies emptied of planes. Sudden quiet.

Where I live in the Forest of Dean I would look out in the mornings at the forest and our garden, hear the spectacular birdsong and wondered what the day would bring. The beauty of the Spring was exceptional but the regular updates on the radio were almost too much to bear. The daily TV briefings felt like we were moving into a war zone. This contrast of the fabulous wonders of nature and the chaos of the coronavirus initially prevented me from any creative activity. I was the rabbit caught in the headlights, unable to move. After a few weeks I nervously started a series of drawings of the views from the house, inspired by the Grayson Perry ‘Art Club’ TV programme. However, they looked too ‘pretty’ and said nothing of this invisible virus.

Soon unfamiliar acronyms and words were being used daily, SAGE, Whitty, furlough, lockdown etc. I asked myself what were the positive aspects of this strange time? A sense of community, of kindness, love, support. Equally, what were the painful parts, the deaths, the increase in domestic violence. As I made lists of words and phrases I realised I could add these as a contrast to the beauty I was personally experiencing but recognising the pain and loss many were facing.

I decided the piece of work needed to be large enough to make a real impact, a talking point, unmissable and a real challenge for me as I work on a 40+ year old Bernina Minimatic. Technically to make it I chose to work in 10 x 10 inch squares, a total of 24. Each piece shows a range of translucent tones of voiles to build up depth. These are machined using mostly straight stitch and cut away in areas to reveal the colours underneath.

My final embroidery is based on a view of my garden and landscape of the forest beyond, in the full bloom of Spring. Over the top in large bold lettering are stitched the key words and smaller lettering using a variety of fonts for a range of other important words that purposely juxtapose the contrasting message. 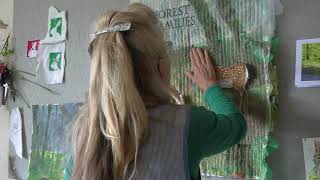